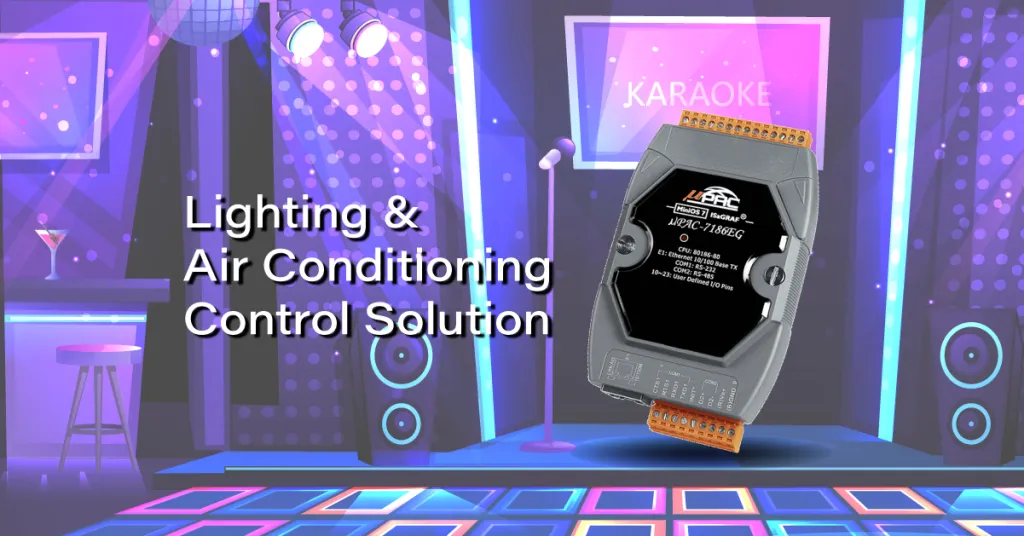 Karaoke/KTV has become one of the most popular entertainment arenas for modern people. Automation control has been introduced to enhance the services already provided, and to create add-on value by delivering new services.

Lighting control and air conditioning are the most critical features for indoor entertainment sites, especially for private Karaoke/KTV rooms. Lighting control usually plays a vital role in creating a pleasant atmosphere, and air conditioning helps to remove unpleasant odors while also adjusting the temperature to ensure a comfortable environment.

When it came to the design of a lighting control system in the past, the designer usually tried to separate the operations into as many elements as possible. The customer then had to perform a large number of processes to make manual adjustment, and turn multiple switches on or off to achieve the desired effect for specific lighting requirements. Nowadays, as lighting control requirements are becoming increasingly complicated , people prefer a simplified all-in-one-touch operation, i.e., a control panel with convenient one-click options to achieve the various lighting requirements.

In the past, these operations were performed by turning the switches on or off and adjusting them the switches to control the air volume in order to achieve the desired temperature, and the configuration was hard to perform. As Technology has advanced in recent years, these tedious operations can be replaced with an integrated control panel containing intuitive interfaces that allow users to efficiently perform each the tasks simultaneously.

To create a comfortable environment at Karaoke/KTV sites, ICP DAS provides a lighting control and air conditioning control system. The architecture of this system is planned by carefully considering all the requirements from an integrated perspective. The design for the communication connections and the modules selected are all prepared by collecting data based on the scale and needs of the location. The Modbus protocol is used to implement the communication for this system. As ICP DAS provides a wide range of Modbus modules to select from, it is easy to choose a device that has the most appropriate I/O combinations to meet the specific requirements based on the control operations and functions of the devices.

In this modern world, independent systems that don’t include distributed resources are gradually being eliminated due to a lack of efficiency and flexibility. Consequently, small orders (subsystems) of a system are becoming popular thanks to the advantages they provide, such as the flexible features, effective costs and energy efficiency, which are the necessary components of the “Internet of Things”. The system can operate independently while simultaneously providing inter-connective communication if required.

The songs stored in the database are classified into four modes: “bright”, “soft”, “romantic” and “dynamic”. When a song is played, a signal will be sent to the lighting control system to launch the corresponding lighting control operations.

The system can perform operations related to the time charging for the room. It can also automatically turn on the equipment in a private room just before the occupancy time starts to be charged. When the room is idle, the operations can also be automatically turned off so as to save energy.

In a Karaoke/KTV room, carts and crockery are used for dining services. If the customers in a private room require it to be cleaned, they can move the dining cart and the used crockery to a specific zone. Through infrared position detection, a message can be automatically sent to cleaning service staff to provide an immediate notification.

In this Karaoke/KTV application, the issue we faced was that each private room was equipped with a lighting control system, an air conditioning system, and a call button for the service system, as well as a few services for other purposes. In the initial deployment, each service was independent of each other, therefore a separate wall-mounted control interface was required, which confused the customers and made it difficult to maintain.

By using the ICP DAS lighting and air conditioning control solution, all of the services could be integrated, and the operations could be linked for a more efficient performance. The resources and information could be shared, and the combined data could be easily collected for further analysis and management from an overall perspective. The integrated touch screen HMI controller allowed all control interfaces to be displayed as pages on a single touch screen, meaning that the operations could be simple, intuitive and efficient, providing the customers with a complete new and better service experience.