For decades, fire warning alarm systems have proved to be very important in saving lives and property from fires that happen all the time. Do you know the difference between a traditional alarm system and a linked fire alarm system from ICP DAS ?

If a fire is detected, the traditional fire alarm system will send an alarm to the control center to notifying them where the fire has occurred. However, any occupants near the scene of the fire will not receive a notification, so they have no idea of the exact location of the fire. It can be said that they might not have enough information to identify the best escape route or to make the best decision regarding protecting their lives and property.
In contrast, the advanced P2P functions of the WISE modules from ICP DAS can be used to build an intelligent linked fire alarm system to provide better solutions for fire alarm applications. 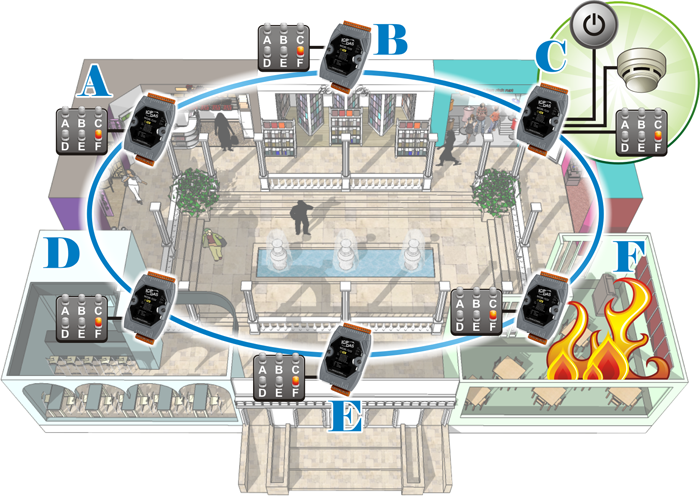 Assume that there is a requirement to install a linked fire alarm system in a building which is divided into six areas, as depicted in the image above. What we can do is install a WISE-7152 module in each area, and connect the DI channels on each module to the temperature or smoke sensors and the emergency switches so as to detect a fire if it occurs. The DO channels on the WISE-7152 modules are connected to six warning lights, one warning light for each region.

The WISE-7152 module is based on the IEEE 802.3af-compliant (classification, Class 1) Power over Ethernet (PoE) specification, which allows power to be received from a PoE-enabled network using Ethernet pairs (Category 5 Ethernet cable). This feature provides greater flexibility and a higher efficiency, therefore simplifying system design, saving space, reducing the number of cables, and eliminating the requirement for dedicated electrical outlets. At the same time, the WISE-7152 module will still be able to receive power from auxiliary power sources such as AC adapters or batteries, etc., in situations where it is operating in a non-PoE environment.

For more product information about the WISE series, click the link following: https://icpdas.com.vn/wise-7152-cr/.